Our house is a former winery, built in 1740/1741 and continuously owned by the family until today. Thick quarry stone walls, strong beams and numerous portraits and objects from the possession of the ancestors tell of the eventful history of this listed property. Built on three sides with a “Brennhäusle” (where schnapps used to be distilled) and a large barn, the house with its elevated entrance above the large vaulted cellars is a fine example of the estates of well-off Markgräfler winegrowers. 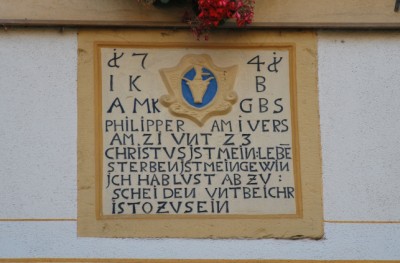 The door sign embedded above the entrance names the builder Johann Kaltenbach, Meier and Vogt in Laufen and scion of an influential family that had lived here since the Middle Ages – eleven times great-grandfather of the current owner Johannes Güntert. The two Bible verses take us back to the time of the Baroque: in 1741, George Frideric Handel composes his “Messiah”, Johann Sebastian Bach works on his Mass in B minor, the War of the Austrian Succession is in full swing. Not the last war to leave its mark: After the First World War, Christine Kaltenbach, widowed Gilfrich, succeeds in buying the estate up for auction with the support of Laufen citizens and thus preserves it for her descendants. Wolfgang and Ursula Güntert, the parents of Johannes Güntert, run the Güntert-Gilfrich winery – in 2009 and 2010, it is extensively renovated by old building experts under the current owners. From the door handles to the roof truss beams with wooden nails to the clay framework and stucco ceilings, care was taken to ensure that the restoration was as careful as possible, combining historical features with modern building technology, and thus taking the estate into the next centuries. Next year, the house will be 280 years old: with its thick, durable walls, it still knows how to give the people who live in it a feeling of solidarity and security. It has survived a lot, it has many stories to tell – and the mighty chestnut tree in the courtyard stretches its wide branches vigilantly over everything.